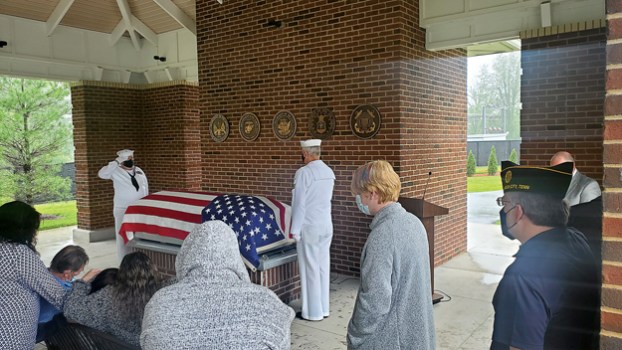 Contributed Photo Seaman 2nd Class James Wesley Smith was the 7th remaining survivor from the sinking of the USS Indianapolis in the Philippine Sea during WWII.

Seaman 2nd Class James Wesley Smith was interred at Mountain Home National Cemetery on Monday, May 10th.  He was the 7th remaining survivor from the sinking of the USS Indianapolis in the Philippine Sea during WWII.  He will be sorely missed by his family and his community.
The USS Indianapolis (CA 35) was sunk on July 30, 1945, by Japanese submarine I-58.  It had just delivered the final components for the first nuclear weapon used by the United States days before it was sunk.  1,195 crewmen were onboard.  Approximately 300 went down with the ship.    The remaining crew was adrift at sea for days with few supplies before rescue operations began on August 2. They succumbed to wounds, exposure, dehydration, and shark attacks. Only 316 of them survived. Petty Officer Smith was brought back to the United States to recover and was honorably discharged on 21 March 1946.
James enlisted in the Navy at the age of 17 but told them he was 18. James called the USS Indianapolis his home for 19 months before the torpedo hit the ship. His passion in life was to share his extraordinary story of survival with others. Despite all the trauma he experienced, James always had a smile on his face.
VA operates 155 national cemeteries and 34 soldiers’ lots and monument sites in 42 states and Puerto Rico. More than 4 million Americans, including Veterans of every war and conflict, are buried in VA’s national cemeteries. VA also provides funding to establish, expand, improve, and maintain 118 Veterans cemeteries in 48 states and territories including tribal trust lands, Guam, and Saipan. For Veterans not buried in a VA national cemetery, VA provides headstones, markers or medallions to commemorate their service. In 2017, VA honored more than 361,892 Veterans and their loved ones with memorial benefits in national, state, tribal and private cemeteries.
Information on VA burial benefits is available from local VA national cemetery offices, from the Internet at www.cem.va.gov, or by calling VA regional offices toll-free at 800-698-2411 (MyVA411). To make burial arrangements at any open VA national cemetery at the time of need, call the National Cemetery Scheduling Office at 800-535-1117.